How is soil Formed? Profile of soil, How is Solid Formed- 2021

How is soil formed?

Soil is ths thin layer of material covering the earth’s surface and soil is formed from the weathering of rocks. It is made up mainly of "mineral particles"(Mater Particals), organic materials, air, water and living organisms— all of which interact slowly yet constantly. so 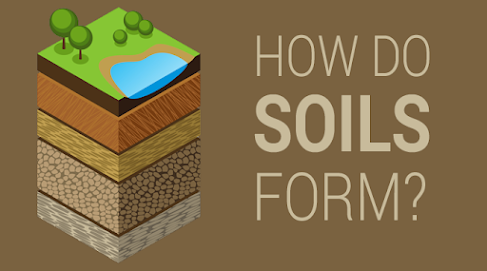 *Most plants get their nutrients from the soil and they are the main source of food for humans, animals and birds. Therefore, most living things on land depend on soil for their existence.

*Soil is a valuable resource that needs to be carefully managed as it is easily damaged, washed or blown away. If we understand soil and manage it properly, we will avoid destroying one of the essential building blocks of our environment and our food security. so, this is how soil is formed.

As soils develop over time, layers (or horizons) form a soil profile.

Most soil profiles cover the earth as 2 main layers—topsoil and subsoil. 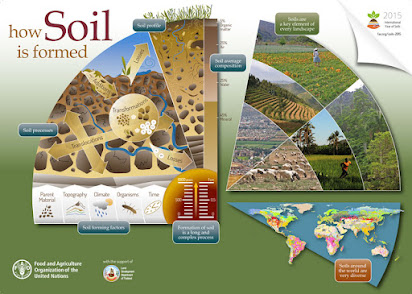 A. horizon—humas-rich topsoil where nutrient, organic matter and biological activity are highest (i.e. most plant roots, earthworms, insects and micro-organisms are active). The A horizon is usually darker than other horizons because of the organic materials.

B. horizon—clay-rich subsoil. This horizon is often less fertile than the topsoil but holds more moisture. It generally has a lighter colour and less biological activity than the A horizon. Texture may be heavier than the A horizon too.

C. horizon—underlying weathered rock (from which the A and B horizons form).

Some soils also have an O horizon mainly consisting of plant litter which has accumulated on the soil surface.

The properties of horizons are used to distinguish between soils and determine land-use potential.

How is solid Formed?

Solid, it is one of 3rd basic states of matter, the others being liquid and gas. (Sometimes like plasmas, or ionized gases, are considered a 4th state of matter.) A solid forms from liquid or gases partical because the energy of atoms decreases (Compressor) when the atoms take up a relatively ordered, three-dimensional structure. So this is how solid is formed. 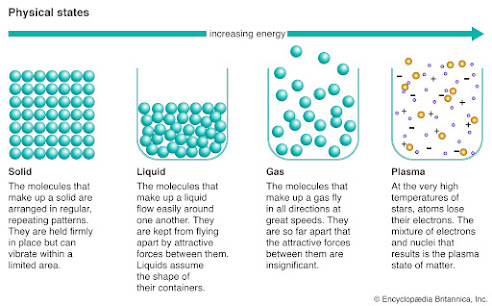 Solids exhibit certain characteristics that distinguish between them from liquids and gases. All solids have the ability to resist forces applied either perpendicular or parallel to a surface (i.e., normal or shear loads, respectively). Such properties depend on the properties of the atoms that form the solid, on the way those atoms are arranged (Form), and on the forces between them.

Solids are generally divided into 3 broad "classes—crystalline", "noncrystalline" (amorphous), and "quasicrystalline". Crystalline solids have a very high degree of order in a periodic atomic arrangement. Practically all metals and many other minerals, such as common table salt "Nacl" (sodium chloride), belong to this class.

Noncrystalline solids are those in which atoms and molecules are not organized in a definite "lattice pattern". They include glasses, plastics, and gels. Quasicrystalline solids display novel symmetries in which the atoms are arranged in quasiperiodic fashion—i.e., in patterns that do not repeat at regular intervals. They exhibit symmetries, such as fivefold symmetry, that are forbidden in ordinary crystals. Quasicrystal structures are common in alloys in which aluminum is combined with another metal, such as iron, cobalt, or nickel.

4 principal types of atomic bonds are found in crystalline solids: metallic compound, ionic compound, covalent compound, and molecular compound. Metals and their alloys are characterized in the main by their high electrical & thermal conductivity, which arise from the migration of 'free electrons'; free electrons also influence how the atoms bond. Ionic crystals are aggregates of charged ions.

These salts commonly exhibit ionic conductivity, which increases with temperature. Covalent crystals are hard, frequently brittle materials such as diamond, silicon, and silicon carbide. In the simpler, monatomic types (e.g., diamond), each atom is surrounded by a number of atoms equal to its valence. Molecular crystals are substances that have relatively weak intermolecular binding, such as dry ice (solidified carbon dioxide), solid forms of the noble gases (e.g., argon, krypton, and xenon), and crystals of numerous organic compounds.

Here, Various alloys, salts, covalent crystals, and molecular crystals which are good conductor of electrical insulators at low temperature become conductors at elevated temperatures, conductivity increasing rapidly(speedy) with temperature. Materials of this type are called semiconductors. Their electrical conductivity is generally low when compared with that of such metals as copper, silver, or aluminum.

So, this are some information about soil and solid how is it formed.